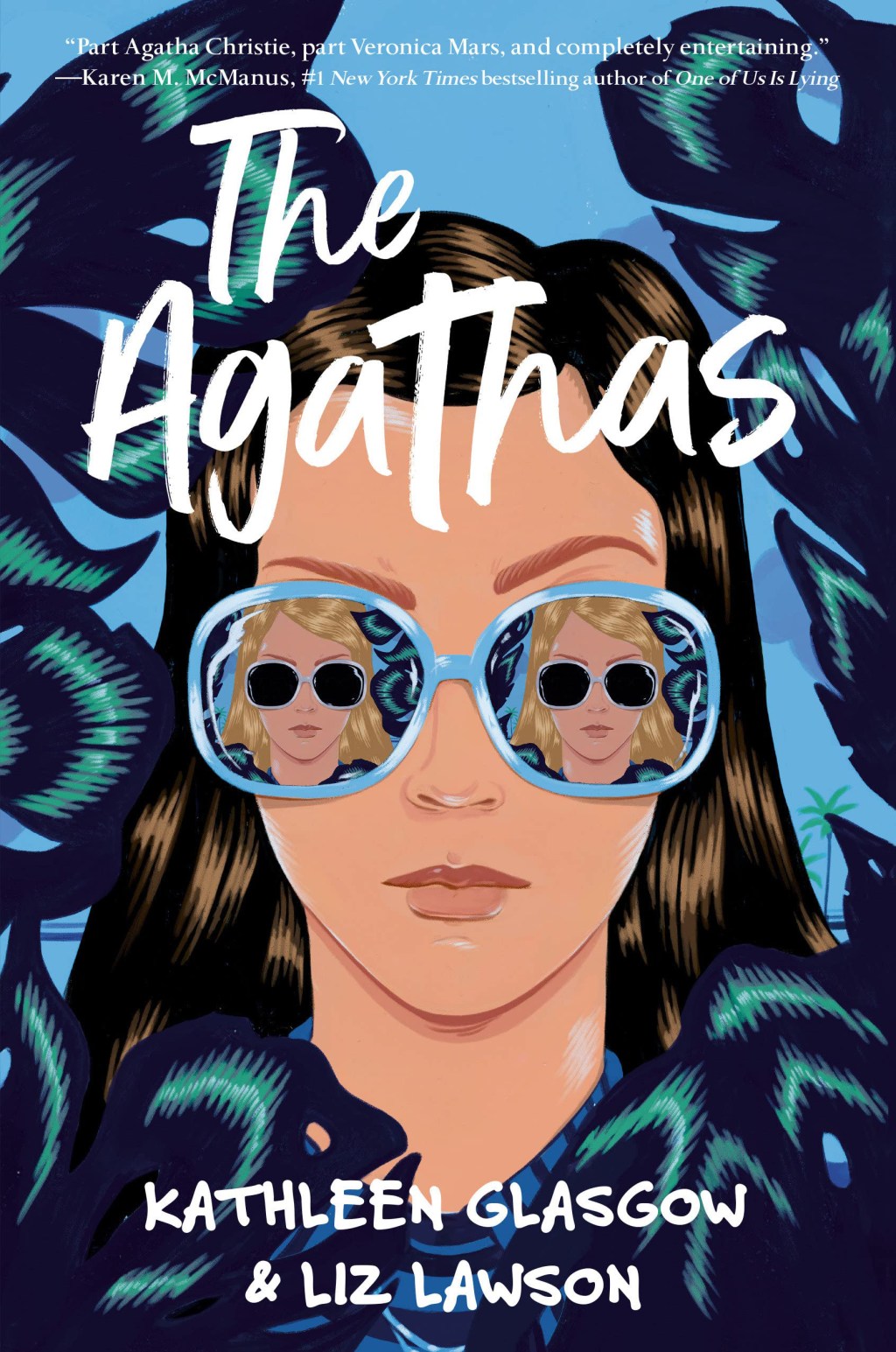 Spring books are rolling in, so many good ones by and about Minnesotans it’s hard to decide which ones to highlight. In fiction, mystery/crime writers have been busy with several new books in popular series as well as intriguing debuts. In nonfiction, we have the first deep dive into the life of George Floyd, as well as an investigation into the Slenderman attack on a girl by her two friends in Wisconsin. Here’s your clip-and-save list, compiled with information from early reader copies and publishers, listed by release date. This is just the first wave of Spring/Summer books. We will bring you new ones as soon as possible.

“The Agathas” by Kathleen Glasgow and Liz Lawson (Delacorte Press) – Alice Ogilvie’s best friend has gone missing in the town of Castle Cove and Alice and her tutor Iris are trying to solve the mystery with the help of books by Agatha Christie. They have no idea the danger they are putting themselves in. Glasgow, a former Minnesotan living in Tucson, Arizona, is the bestselling author of Girl in Pieces and You’d Be Home Now. Lawson is the author of one of Kirkus’ best books of 2020, The Lucky Ones. She lives in Washington, DC (May 3)

“The Barrens: A Novel of Love and Death in the Canadian Arctic” by Kurt Johnson & Ellie Johnson (Arcade Publishing) – Two young women embark on a summertime adventure of paddling the rapid-strewn Thelon River, which flows through the uninhabited Barren Lands of the subarctic, in this debut novel by a local father-daughter writing team Canada flows St. Paul. When one of the women falls and soon dies, her partner, an inexperienced paddler, must continue the grueling and dangerous journey alone to save herself and return her lover’s body to civilization. (May 3)

“The Moments Between Dreams” by Judith F. Brenner (Greenleaf Book Group Press) – In this debut novel, Carol ponders why her dreams went haywire. Her daughter is hospitalized with polio in isolation, and her husband, who beat her over a minor disagreement, is drafted into World War II. The author draws parallels between what the world has experienced before and now due to the COVID pandemic. Full of haunting dilemmas, but spirited and hopeful about love and life. (May 3)

“Something crazy” by David Housewright (Minotaur Books) – The 19th crime novel in the award-winning Housewright series, starring PI Rushmore “Mac” McKenzie, finds the wealthy former St. Paul police officer who has retired from a second career as a detective to solve cases for family and friends to take over . But when his “better half” Nina asks him to help her friend Jenness Crawford, he agrees. The woman’s grandmother has abandoned her 19th-century castle, which has been a hotel/resort for more than 100 years, and Jenness believes that one of the heirs killed her grandmother. McKenzie is trapped in the castle full of feuding relatives, longtime retainers and a possible assassin. Housewright has won a Mystery Writers of America Edgar Award and three Minnesota Book Awards. (May 24)

“And there he stayed She” by Joshua Moehling (Poisoned Pen Press) – Another debut thriller that begins with two teenagers breaking into a house by a remote lake in search of prescription drugs, unaware that Emmett Burr has secrets he’s been keeping in the preserved in the basement of his house. He gains the upper hand over his tormentors and the boundaries between victim, perpetrator and protector become blurred. Located in the small town of Sandy Lake, Minnesota, Deputy Sheriff Ben Pickard leads the investigation into the missing teenagers when he is forced to reveal his own secrets and dig deep to uncover the dark part of the place he is now calls home. (June)

“Cougar Claw” by Cary J. Griffith (Adventure Publications) – In his second Sam Rivers crime thriller, Griffith sends US Fish & Wildlife Special Agents and wildlife biologists to investigate the scene of a deadly cougar attack on a human. This is an unlikely event, but wealthy business owner Jack McGregor is found dead and physical evidence points to the animal. With the help of reporter Diane Talbott and his wolfhound, Gray, River’s investigation uncovers many of the motives behind McGregor’s murder. Sam’s knowledge of the backcountry, cougars and criminal spirit will be put to the test as he tries to solve the case – and stay alive. (June)

“The lost one” by Jeffrey B. Burton (Minotaur Books) – Mason “Mace” Reid is back for his third adventure with his pack of cadaver dogs, which he calls “The Finders.” His best student Vira is a golden retriever. Reid lives on the outskirts of Chicago and specializes in human remains detection. In “The Lost,” a home invasion-turned-kidnapping at the mansion of wealthy Kenneith J. Druckman brings Mace and Vira to a northern Chicago suburb, where Druckman was attacked and left behind while his wife and young daughter were taken for ransom became. When Vira finds the body of the mother, a former supermodel, everyone is on high alert to find Druckman’s missing 5-year-old daughter. But the trail Vira finds in the dense woods of the property leads straight back to Druckman himself. With the help of Det. Kippy Gimm, Reid and Vira race against the clock to save the child. (June)

“They are drowning our daughters” by Katrina Monroe (Poisoned Pen Press) — This debut novel is a tale of mothers and daughters. Through a queer, feminist lens, Monroe weaves a gothic tale about a woman’s quest to save her daughter from the violent generational trauma that can manifest itself through a dangerous haunting. This is one of the “buzziest” books of the season, with CrimeReads calling it one of the 16 horror novels to watch out for in 2022. (July 12)

“Forever Boy: A Finding Mother’s Memories of Autism and Joy” by Kate Swenson (Park Row Books) — When the author’s son, Cooper, was diagnosed with severe nonverbal autism, her world stood still. As Cooper grew, Kate experienced the sadness and exhaustion that comes with having to fight for your child in a world stacked against her. But she learned through hard work and personal growth that Cooper wasn’t the one who needed to change. Swenson is the creator of the Finding Coopers Voice blog and Facebook page. She is a contributor to Today Parents, the Today TV show, and the Love What Matters blog. (April)

“His name is George Floyd” by Robert Samuels and Toluse Olorunnipa (Viking) – Subtitled “One Man’s Life and the Fight for Racial Justice,” Washington Post reporters tell for the first time the full story of the life of George Floyd, who was murdered below the knee by a Minneapolis police officer took place officer sparked protests. From Houston’s housing projects, where Floyd faced the systemic pressures of being black in America, to his family roots in slavery and sharecropping, the segregation of his schools, over-policing of Minneapolis’ black community, and a disregard his battle with addiction, the book shows this ordinary man dying on a Minneapolis street. Based on hundreds of interviews with Floyd’s family and friends. (17th of May)

“Mini Forest Revolution” by Hannah Lewis (Chelsea Green Publishing) – The first book about a movement to restore biodiversity in our cities and communities by converting empty lots, backyards and degraded land into mini-forests through the Miyawaki Method. This unique approach to reforestation was pioneered by Japanese botanist Kira Miyawaki to create tiny forests that grow rapidly in small areas and have greater biodiversity than those planted using traditional methods. She examines the science behind how mini-forests work and their myriad environmental benefits, including cooling urban heat islands, establishing wildlife corridors, improving soil health, sequestering carbon, creating habitats for pollinators, and more. (June)

“Seven Aunts” by Staci Lola Drouillard (University of Minnesota Press) – A patchwork of memoirs, poetry, testimonies, love letters and family lore in an unconventional portrait of ways of life largely lost to history, revealing women who defied expectations and overwhelming odds had a place in the world for the next generation. The author is a descendant of the Grand Portage Band of Lake Superior Anishinaabe and lives in Grand Marais. (June)

“Spirit Matters: White Clay, Red Exits, Distant Others” by Gordon Henry (Holy Cow! Press) – Poetry collection by an inscribed member/citizen of the White Earth Anishinaabe Nation of Minnesota, narrated in packets and articles, letters, images, repeating themes, rhythms and sounds. Pulitzer Prize winner Louise Erdrich says of the collection: “(It) is haunted by people whose voices are so indelible that they speak from a world beyond—a mighty land where stories are charms that inhabit the living… a gripping, spooky book. ” (14th June)

“Wonderlands‘ by Charles Baxter (Graywolf Press) – In his new collection of essays, some of which made their debut as expert papers at the Bread Loaf Writers’ Conference, Baxter shares years of wisdom about what makes fiction work from the nature of wonderlands in the fiction of Haruki Murakami and other fabulous writers to reflections on his own life. Baxter is the author of 14 books, including novels, short stories and poetry. He is retired after 18 years teaching creative writing in the University of Minnesota MFA program. (July 12).

“Slenderman: Online Obsession, Insanity, and the Violent Crime of Two Midwestern Girls” by Kathleen Hale (Grove Press) – It was big news in the Twin Cities and across the country in 2014 when two 12-year-old girls in Wisconsin tried to kill their friend, who survived 19 stab wounds. The author, who is from Wisconsin and lives in Los Angeles, drew on court transcripts, police reports and anecdotal reports to reveal the full story about the girls looking to placate an internet-born creature. A look at the importance of justice, accountability and victimhood and the lack of child mental health services in the country. (August)